Volunteers of America Honors John Georges With its 2018 Empathy Award 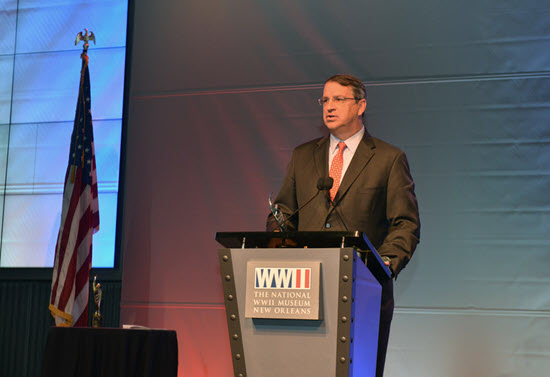 John Georges is the owner and publisher of The Advocate, Louisiana’s largest daily newspaper. He is also the chairman of Georges Enterprises, a family business founded in 1916 by his grandfather, Gus Pelias. Georges is known for his philanthropy and contributions to nonprofits, universities, museums and civic groups. He supports a diverse group of charities, with an emphasis on education, the arts, preservation and faith-based initiatives.

Georges played a significant role in recovery efforts for the University of New Orleans and its arena after Hurricane Katrina, and also was instrumental in rebuilding his own and other churches after the storm. He was honored during a June 5 awards dinner hosted by Volunteers of America at the National WWII Museum in New Orleans.

Volunteers of America’s Empathy Award was first given to the Chicago Tribune in 1995 for a crusading series on violence against children. Other recipients have included “Dead Man Walking” author Sister Helen Prejean, national columnist E.J. Dionne, Washington Post editor Colbert I. King and CNN.

Approximately 600 Volunteers of America leaders and care providers from across the United States travelled to New Orleans for the organization’s 2018 National Conference on June 2-5. Volunteers of America Southeast Louisiana offers more than 20 human services programs that support and empower children, families, seniors, individuals with disabilities and veterans in 16 south Louisiana parishes, including the New Orleans area. Delivering lifesaving short-term and lifelong services to those in need, the affiliate serves more than 50,000 of the most underserved individuals annually.

About Volunteers of America

Volunteers of America is a national, nonprofit, faith-based organization dedicated to helping those in need live healthy, safe and productive lives. Since 1896, our ministry of service has supported and empowered America's most vulnerable groups, including veterans, seniors, people with disabilities, at-risk youth, men and women returning from prison, homeless individuals and families, those recovering from addictions and many others. Through hundreds of human service programs, including housing and health care, Volunteers of America helps almost 1.3 million people in over 400 communities. We offer a variety of services for older Americans, in particular, that allow them to maintain their independence and quality of life – everything from an occasional helping hand to full-time care. Our work touches the mind, body, heart and ultimately the spirit of those we serve, integrating our deep compassion with highly effective programs and services.